Markets rose dramatically this week as May employment data shocked analysts. Context needs to be given to fully appreciate how surprising Friday’s numbers were; no one anticipated the employment numbers released on Friday. And by no one, that means literally no one. Bloomberg survey analysis shows that not a single economist predicted a positive number, much less an incredible hiring surge. New hires for 2.5 million people were reported. Not only is this the highest number in U.S. history, it also exceeded consensus expectations by an unprecedentedly wide gap of 10 million people, making May’s hiring numbers record setting in two ways. Risks are obviously still prevalent, the economy is certainly not out of the woods yet. Tensions with China continue to be an unknown and will likely remain in focus. Unemployment is likely to remain elevated for several more weeks, and the unemployment rate remains at the second highest level in history.

Overseas, markets also reacted favorably to U.S. hiring and general optimism. European countries have begun reopening their economies similarly to the U.S., and investors were encouraged by improving outlooks. All major European indices returned positive results for the second consecutive week. Japanese equities returned positive performance as well. Japan’s battle against Covid-19 has been considered an overwhelming success, having contained the virus without imposing Draconian lockdowns seen in much of the western world. Because the methods used were much less damaging, Japan is likely to be on the more favorable end of the economic damage spectrum.

Markets rose this week, with all major equity indices bringing positive returns. Fears concerning global stability and health are an unexpected factor in asset values, and the recent volatility serves as a great reminder of why it is so important to remain committed to a long-term plan and maintain a well-diversified portfolio. When stocks were struggling to gain traction last month, other asset classes such as gold, REITs, and US Treasury bonds proved to be more stable. Flashy news headlines can make it tempting to make knee-jerk decisions, but sticking to a strategy and maintaining a portfolio consistent with your goals and risk tolerance can lead to smoother returns and a better probability for long-term success. 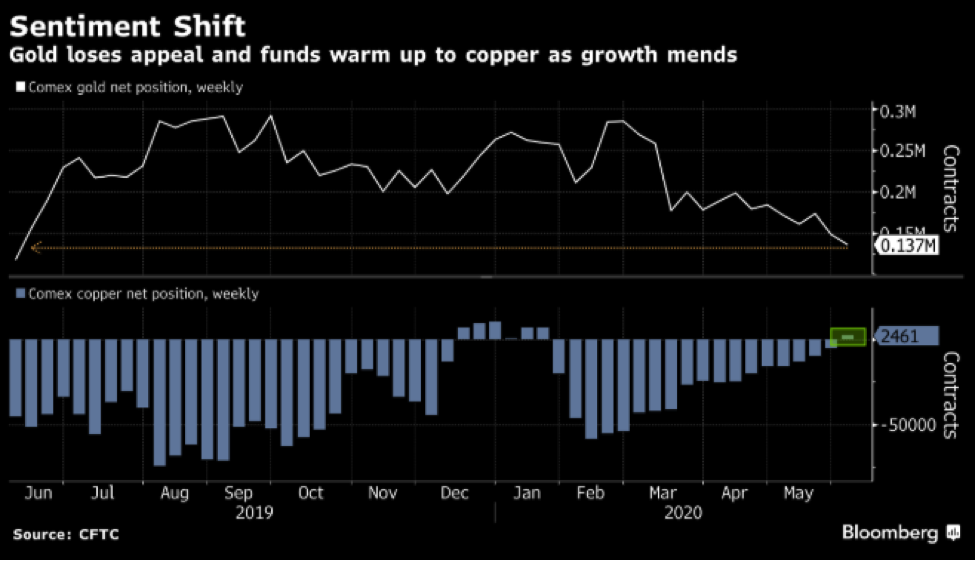 A notable shift took place last month in the commodity futures market. For the first time since January, copper futures have swung into a positive net position. Copper is considered an industrial commodity, usually rising as economic activity increases. An improvement in outlook for the metal could be a sign investors expect economic health to improve.

Broad market equity indices finished the week up, with major large cap indices underperforming small cap. Economic data impressed this week and the steps needed to see continuing improvements are being taken as the U.S. continues the reopening process.

S&P sectors returned unanimously positive results this week for the second week in a row, as broad market movements showed investors buying into all sectors. Energy led the best performing sectors, followed by financials, returning 15.41% and 12.16% respectively. Consumer staples and healthcare performed the worst, posting 1.89% and 0.23% respectively. Technology leads the pack so far YTD, returning 10.55% in 2020.

Commodities rose this week, driven by large gains in oil. Oil markets have been highly volatile, with investors focusing on output and consumption concerns. Recent economic improvements have improved demand outlook, as summer is likely to increase consumption while normal economic activities should continue recovering. Demand is still likely to recover slowly however, as economic activity is not likely to recover instantly. Oil supplies have shrunk dramatically, as operating oil rigs have shrunk by nearly 70% since last year, further helping oil prices to recover.

Yields on 10-year Treasuries rose dramatically from 0.65% to 0.895% while traditional bond indices fell. Treasury yield movements likely reflect a change in economic outlook, indicating that investors are taking on additional risk elsewhere in markets. Treasury yields will continue to be a focus as analysts watch for signs of changing market conditions.

“In the short run, the market is a voting machine, but in the long run it is a weighing machine.”

It can be easy to become distracted from our long-term goals and chase returns when markets are volatile and uncertain. It is because of the allure of these distractions that having a plan and remaining disciplined is mission critical for long term success. Focusing on the long-run can help minimize the negative impact emotions can have on your portfolio and increase your chances for success over time.

In a nutshell, we want the RPI to be low on the scale of 1 to 100. For the US Equity Bull/Bear indicator, we want it to read least 66.67% bullish. When those two things occur, our research shows market performance is strongest and least volatile.

The Recession Probability Index (RPI) has a current reading of 72.72, forecasting a higher potential for an economic contraction (warning of recession risk). The Bull/Bear indicator is currently 66.67% bullish – 33.33% bearish, meaning the indicator shows there is a slightly higher than average likelihood of stock market increases in the near term (within the next 18 months).

This week sees a Fed press release and U of M consumer sentiment. Both indicators are likely to provide important color to the May jobs report, specifically indicating whether or not improving job prospects are having a substantial impact on economic outlook.