Markets fell marginally again this week as the first wave of economic reopenings took place. Several U.S. states are permitting non-essential businesses to open in spite of the continuing Covid-19 threat. Equities finished the week mixed after spending the majority of the week in the green. Prices dropped Friday after President Trump discussed the punitive tariffs against familiar target China for misleading the world about the Covid-19 pandemic. Sectors finished mixed this week. For the second week Energy led the S&P sectors, finishing ahead of communications and materials to round out the strongest sectors. Analysts will likely continue to observe production and consumption adjustments made by market participants closely after shutdowns ground much of economic activity to a halt. Tensions with China will also remain in focus. Unemployment is likely to remain elevated for several more weeks, but economic activity is likely to begin a slow and steady return to normal in the coming weeks and months.

Infection data is becoming more accurate as testing becomes more widely disseminated, helping to better assess economic options.
Overseas, markets performed better than U.S. indices. European countries have begun eyeing reopening their economies similarly to the U.S., likely encouraging investors. On Friday, most European indices were closed for trading for the May Day holiday, sparing them from the negative tariff news. All major European indices returned positive results. Japanese equities returned positive performance as well, as investors seem to be encouraged by developments surrounding the pandemic. After doing better than most developed countries initially, Japan is now starting to experience more widespread outbreaks, prompting an official state of emergency. Japan has the highest percentage of “at risk” population in the world, making containment absolutely critical.

Markets were mixed this week, with major equity indices bringing very different returns. Fears concerning global stability and health are an unexpected factor in asset values, and the recent volatility serves as a great reminder of why it is so important to remain committed to a long-term plan and maintain a well-diversified portfolio. When stocks were struggling to gain traction last month, other asset classes such as gold, REITs, and US Treasury bonds proved to be more stable. Flashy news headlines can make it tempting to make knee-jerk decisions, but sticking to a strategy and maintaining a portfolio consistent with your goals and risk tolerance can lead to smoother returns and a better probability for long-term success. 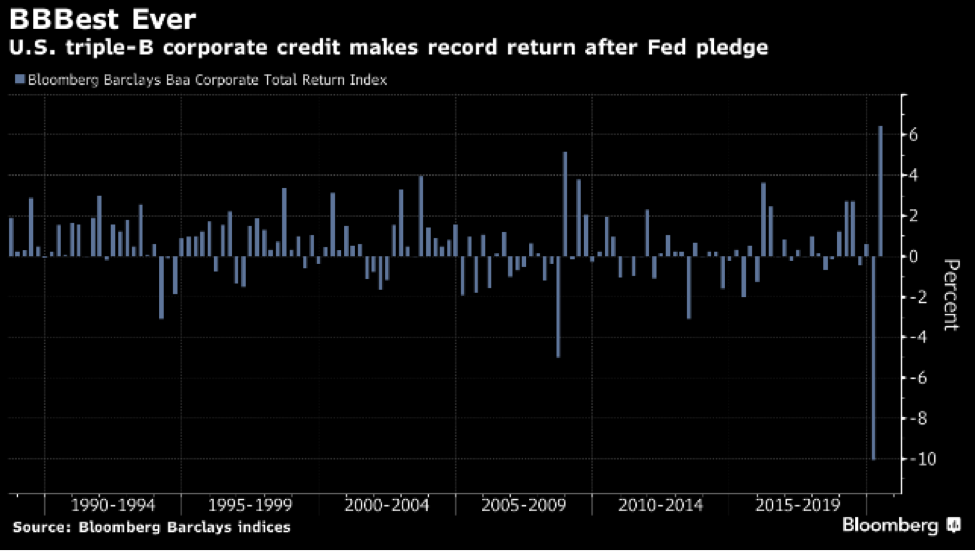 BBB rated debt recovered dramatically during April, returning an impressive 6.4% gain. The move was precipitated by the Federal Reserve, which committed to buying BBB rated bonds even if they fall to junk status.

Broad market equity indices finished the week mixed, with major large cap indices underperforming small cap. The return of tariff fears have returned to markets, prompting a significant downswing in prices late in the week. Economic data is still predominantly negative, but the first steps needed to see leveling out are being taken, as multiple U.S. states have reopened their economies and more are poised to do the same this month.

Commodities rebounded this week, driven by large gains in oil. Oil markets have been highly volatile, with investors focusing on output and consumption concerns. Global fears surrounding the virus outbreak have stoked demand concerns, as a significant impact on energy demand is expected as a result. Demand is likely to recover slowly, as countries around the globe have begun re-opening their economies. The supply side of the equation is likely to face reductions in output, as lack of storage will continue to be a problem.

Yields on 10-year Treasuries rose from 0.60% to 0.61% while traditional bond indices fell. Treasury yields rose as the efforts to contain the spread of Covid-19 appear to be yielding results and the economy is set to gradually reopen. Treasury yields will continue to be a focus as analysts watch for signs of changing market conditions.

“The individual investor should act consistently as an investor and not as a speculator. This means … that he should be able to justify every purchase he makes and each price he pays by impersonal, objective reasoning that satisfies him that he is getting more than his money’s worth for his purchase.”

It can be easy to become distracted from our long-term goals and chase returns when markets are volatile and uncertain. It is because of the allure of these distractions that having a plan and remaining disciplined is mission critical for long term success. Focusing on the long-run can help minimize the negative impact emotions can have on your portfolio and increase your chances for success over time.

In a nutshell, we want the RPI to be low on the scale of 1 to 100. For the US Equity Bull/Bear indicator, we want it to read least 66.67% bullish. When those two things occur, our research shows market performance is strongest and least volatile.

The Recession Probability Index (RPI) has a current reading of 40.23, forecasting further economic growth and not warning of a recession at this time. However, with the unique economic circumstances caused by COVID-19, many economic indicators are expected to turn more negative as data is updated throughout the next month, which will increase the probability for a recession from the current reading. The Bull/Bear indicator is currently 0% bullish – 100% bearish, meaning the indicator shows there is a slightly higher than average likelihood of stock market decreases in the near term (within the next 18 months).