Markets fell this week as the Fed injected some harsh truth into the conversation around the economic recovery under way. In its press conference on Wednesday, Fed Chair Powell stressed that while the May jobs numbers are certainly a positive development and that the economy has likely already hit bottom, it’s unlikely that the recovery will be swift and virtually certain than many unemployed Americans will not get their jobs back. The realistic sentiment put the brakes on a rally that had started in recent weeks, causing equities to drop. Further economic data in the coming weeks will hopefully shed further light on true economic conditions, as even Powell had to admit that they can’t say with certainty the speed at which the economy will recover. Focus surrounding risks seems to have shifted back towards employment and economic output.

Overseas, markets also declined, responding to the more realistic tone projected by the Federal Reserve. All major European indices returned negative results for the week. Japanese equities returned negative performance as well, but much more modest numbers than American and European counterparts. As global economies are beginning to reopen, the prevalence of Covid-19 headlines are likely to start to recede, and focus is likely to dial in more on global recovery efforts.

Markets dropped this week, with all major equity indices bringing positive returns. Fears concerning global stability and health are an unexpected factor in asset values, and the recent volatility serves as a great reminder of why it is so important to remain committed to a long-term plan and maintain a well-diversified portfolio. When stocks were struggling to gain traction last month, other asset classes such as gold, REITs, and US Treasury bonds proved to be more stable. Flashy news headlines can make it tempting to make knee-jerk decisions, but sticking to a strategy and maintaining a portfolio consistent with your goals and risk tolerance can lead to smoother returns and a better probability for long-term success. 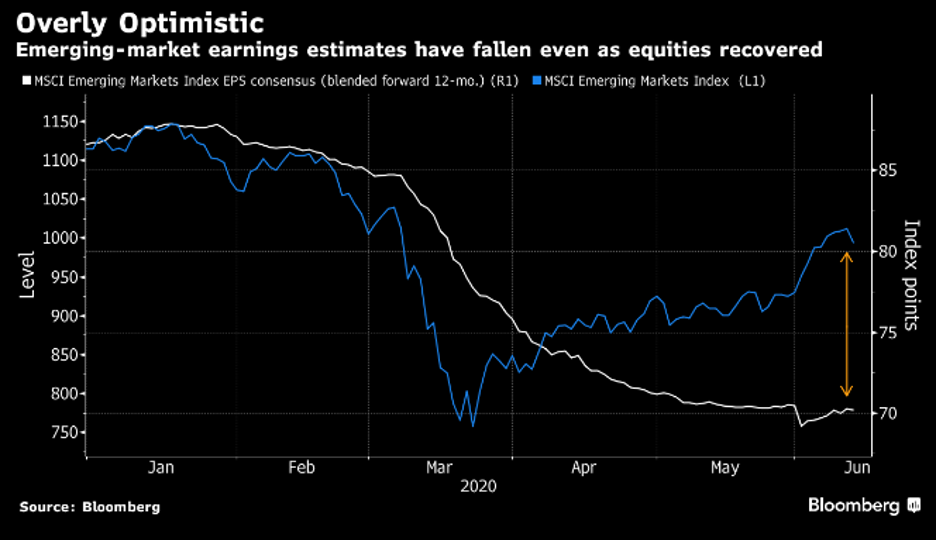 Emerging markets have displayed an unexpected divergence in earnings estimates and equity prices. As earnings estimates have dropped with economic forecasts, prices have still managed to appreciate since March, causing a notable gap between market values and analyst consensus.

Commodities fell this week, driven by large losses in oil. Oil markets have been highly volatile, with investors focusing on output and consumption concerns. Recent economic improvements have improved demand outlook, as summer is likely to increase consumption while normal economic activities should continue recovering. Demand is still likely to recover slowly however, as economic activity is not likely to recover instantly. Oil supplies have shrunk dramatically, as operating oil rigs have shrunk by nearly 70% since last year, further helping oil prices to recover.

Yields on 10-year Treasuries fell dramatically from 0.895% to 0.70% while traditional bond indices rose. Treasury yield movements reflect general risk outlook, indicating that investors are shedding risk after the Chair Powell’s conference. Treasury yields will continue to be a focus as analysts watch for signs of changing market conditions.

-Robert Kiyosaki
It can be easy to become distracted from our long-term goals and chase returns when markets are volatile and uncertain. It is because of the allure of these distractions that having a plan and remaining disciplined is mission critical for long term success. Focusing on the long-run can help minimize the negative impact emotions can have on your portfolio and increase your chances for success over time.

In a nutshell, we want the RPI to be low on the scale of 1 to 100. For the US Equity Bull/Bear indicator, we want it to read least 66.67% bullish. When those two things occur, our research shows market performance is strongest and least volatile.
The Recession Probability Index (RPI) has a current reading of 72.72, forecasting a higher potential for an economic contraction (warning of recession risk). The Bull/Bear indicator is currently 66.67% bullish – 33.33% bearish, meaning the indicator shows there is a slightly higher than average likelihood of stock market increases in the near term (within the next 18 months).

This week sees Fed Chair Powell testify before Congress and the release of May’s retail sales numbers. Both events are likely to provide some volatility, as Congressmen tend to ask more probing economic questions and May sales numbers could provide some indication on the pace of economic recovery moving forward.